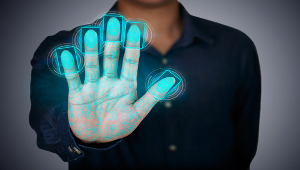 The increasing technological progress allows the rapid measurement of biological characteristics that decidedly identifies a human being. The reliability of the biometric results is based on four basic characteristics:

1. Uniqueness (measured value must be different for all people)
2. Consistency (measured value does not depend on age or time of measurement)
3. Measurability (well-defined measured variables and suitable sensors must exist)
4. Universality (as many people as possible have this characteristic)

In addition to the much-respected authentification methods using DNA, fingerprints and facial patterns, there are other diverse technologies such as the retina and the iris of the eye, the vocal pattern or characteristics of the hands. In addition to biometric security systems which are already used by many companies, a life without biometrics is hard to imagine neither in the field of entertainment electronics nor in our daily routine or even in crime detection.

Biometrics has also been established in fingerprint identification since the 1980s. Automated fingerprint identification systems (AFIS) support the investigators when comparing detected fingerprints of crime scences to recorded fingerprints of the subjects in the databases. Biometric data sets are first detected by suitable scanners, then processed by means of software and finally subsequently stored in databases. To avoid identity theft, biometric data is stored encrypted. The specific features defined by the software are set as reference points and translated into a numeric value. During authentication the user´s biometric data is compared to that in the database. If a match occurs the authentication attempt is considered successful.