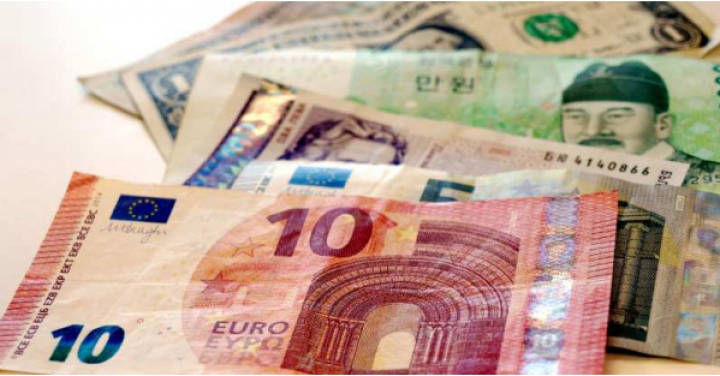 Tremendous amounts of physical money transactions occur each day in every part of the world. As far as the Euro alone is concerned, more than 17 billion banknotes and 111 billion coins are currently in circulation. Although the security features of Euro banknotes have become increasingly sophisticated, 838,000 counterfeit Euro bills were confiscated and withdrawn from circulation in 2014. In cases involving forgery and fraud, latent prints on cash can be an important piece of evidence in securing a prosecution. Although it is rare to find, such a fingerprint can be used to link stolen or counterfeit money to a suspect. 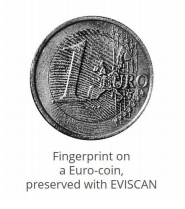 Banknotes present several challenges for latent fingerprint development. Banknotes made of both cotton paper and polymer have certain properties that can cause routine detection techniques to fail. A dirt-repellent coating, complex and irregular backgrounds, the degree of wear and the porosity of paper result in rapid print degradation. EVISCAN, too, has difficulty tracing latent prints on bills. However, as it leaves fingerprints and substrates unaltered, an examination with EVISCAN is certainly worth a try. 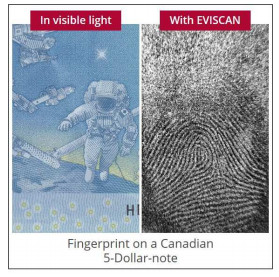 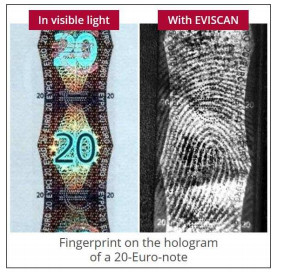 Experimental series whereby banknotes from different currencies were examined revealed that EVISCAN can occasionally recover fresh fingerprints on banknotes. This especially applies to polymer banknotes such as Canadian Dollar bills. The picture on the left shows fingerprint residues on the holographic foil of a 20-Eurobanknote. On the hologram, even fingerprints up to one week old can be detected with EVISCAN.