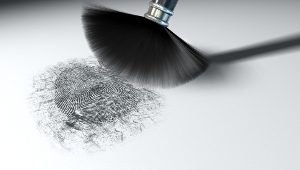 The search for clues begins at the crime scene. Here, evidence is acquired in meticulous detail. This might possibly be fingerprints, blood or saliva residue or other traces. The collected evidence is subject to strict controls, in order to be recognized in court. Therefore, it is important that the police are sufficiently protected by protective suits to prevent contaminating the crime scene with their own traces.

When collecting, all the evidence will be numbered. Also photos are printed to allow digital access to the evidence.

Afterwards the collected evidence is then analyzed. These findings must be carefully reviewed, as in the past it has happened, that incorrect interpretations of the evidence have occurred. Therefore, the results of such investigations are usually not sufficient evidence, but are merely circumstantial evidence, which must be corroborated by other evidence. In addition to dactyloscopy, there are other techniques for the acquisition of evidence. For example, for almost 30 years now genetic fingerprints can also be collected and analyzed.

With EVISCAN fingerprints can be preserved and digitalized in high quality. These can be used to interpret the found fingerprints.