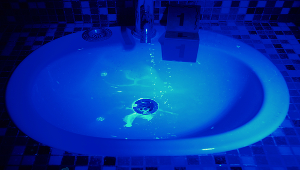 In reacting with an oxidizing agent, Luminol generates a blue chemiluminescence, especially in the presence of catalytic elements. In case of the detection of blood, the Luminol solution, which contains hydrogen peroxide, is applied to blood. The iron of the hemoglobin of the blood works as catalyst which strongly accelerates the local oxidation reaction – the blood becomes visible through intense blue illumination in the dark. The term “Luminol” refers to this reaction: the creation of “luminescence”, the light emission.

Luminol is already utilized in criminalistics since the 19th century to detect blood at crime scenes. Even if it is not possible to see the blood with human eyes (due to low concentration, dark background, small splashes), it is possible to make it visible through the blue light.

Applying this method, even tiny, very old (years later) or already wiped off bloodstains can be made visible. Special photos of the detected spots can be taken which are officially accepted in court. Thus, the utilization of Luminol plays a very important role in solving criminal, i.e. homicide, cases.

Luminol itself is not poisonous. However, working with hydrogen peroxide or sodium peroxide can be dangerous. Those substances are acidly and oxidizing. Thus, working with them is harmful. Even though toxic effects of Luminol to the human body have not been recorded, it is known that it affects the analysis of traces which contain somatic cells.

EVISCAN detects blood without any application of chemicals and provides high resolution pictures of the found bloodstains which can be used in court hearings as well. Thus, working with EVISCAN preserves both, the health of everybody involved in the analysis and the DNA in the bloodstains as well.